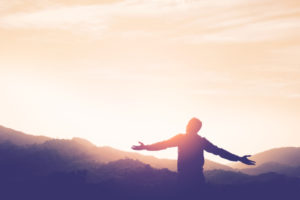 Don’t Be Limited By a Lack of Faith

A woman shopping in Houston happily hummed a tune as she collected the items she wished to purchase and approached the cashier. The clerk just stared at her for a long moment, as though wondering what was wrong with her, offering an obligatory, “How are you doing today?”

That’s all it took. The woman nearly bubbled over. “How nice of you to ask! I’m doing great. I am so blessed!”

The clerk looked at the woman quizzically for a moment and then said, “Let me ask you a question. Do you go to Lakewood Church?”

The clerk shook her head and smiled, “I should have known. Everybody that comes in here like you is from Lakewood.”

What a great compliment! That’s the way it should be. God’s people should be the happiest people on earth. So happy, in fact, that other people notice. Why? Because we not only have a fabulous future, we can enjoy life today!

Living your best life now means being excited about the life God has given you. It means believing for more good things in the days ahead, while living in the moment and enjoying it to the hilt.

Too often, we get comfortable with where we are in life and use that as an excuse to remain in mediocrity. “My parents were poor,” we say with a pout. “Before them, my grandparents were poor. Nobody in my family has ever amounted to much, so I guess I won’t either.”

Don’t believe that lie. My dad came from the poorest of families. His parents were cotton farmers, and they lost everything in the Great Depression. My grandmother worked 14 to 15 hours a day washing people’s clothes, earning 10 cents an hour.

They were good people, but nobody in our family line had ever amounted to much, living instead under a curse of poverty and defeat. Then one day, at age 17, my dad committed his life to Christ, and God put a dream in his heart to preach.

Certainly, the odds were against him. But God is not limited by our environment, family background or present circumstances. God is limited only by our lack of faith.

I’m so thankful that Daddy didn’t listen to all the naysayers. He believed that God had more in store for him than staying home and picking cotton. And because he stayed focused on his dream and was willing to step out in faith, he broke that curse of poverty. Now, my siblings and I, and our children, grandchildren, even our great-grandchildren, are all going to experience more of the goodness of God.

Let me challenge you to believe for more. Don’t travel the road for the next 50 years and be at the same place you’re at today.

Maybe you came from a family like my dad’s, where they didn’t have much. Perhaps you hail from a long line of divorce, failure, depression or mediocrity. You need to say, “Enough is enough. I’m going to start believing God for bigger and better things.”

That was the attitude of Phyllis, one of our members at Lakewood. When Phyllis was 16 years old, she got pregnant and had to leave high school. Her dreams were shattered. She rented a cramped, small apartment in which to live and raise her son, eventually going on welfare.

But finally Phyllis said, “I refuse to pass this lifestyle down to my children. I’m going to be the person God wants me to be.” She got rid of all thoughts of defeat and failure and started expecting the supernatural favor of God. She did her part, and God did His.

Phyllis got a job at a school cafeteria collecting kids’ meal tickets. The job paid minimum wage, and Phyllis was thankful for it. But she wasn’t satisfied, believing that God had better things in store. She went back to school for her high-school diploma. But still, she wasn’t satisfied.

So, after working all day, she began attending college at night. In four years, she graduated with honors, then returned for her master’s degree.

Today, Phyllis is reaping the rewards of that effort. She’s not on welfare anymore; she is a principal in that same school district where she used to collect the meal tickets. She, too, broke the curse of poverty in her family.

You can do something similar. Dream bigger dreams. God wants to do more than you can even ask or think. Start living your best life now!

“Yes, but Joel, it’s been a rough year. I’ve gone through so many disappointments. I’ve lost a lot of good things.”

Maybe so, but have you considered this: If it were not for the goodness of God, you might have lost it all. Why not be grateful for what you have? Quit looking at what’s wrong and start thanking God for what’s right. Get up each day expecting God’s favor.

This could be the day you get your miracle. The day you meet the person of your dreams. The day your child returns home. That’s how you stay enthusiastic, even in tough time: You stay filled with hope.

“What if I do all that and nothing happens?” I hear you saying. “I’ll go to bed all discouraged, another disappointment.”

No, you can go to bed saying, God, even though it didn’t happen today, I’m still believing for good things in my life, knowing that I’m one day closer to a breakthrough.

Friend, no matter what you’ve been through, no matter whose fault it was, no matter how impossible your situation may look, the good news is that God wants to turn it around and restore what has been stolen from you. Most of all, He wants to restore your relationship with Him.

Start expecting things to change in your favor. It’s your faith that activates the power of God. Remember, if you obey God and are willing to trust Him, you will have the best this life has to offer — and more. You can start living your best life now.