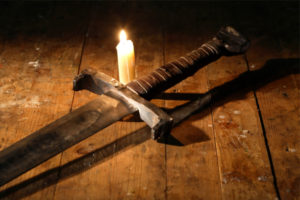 This article is by Micah Hayes and published by FTC

I can’t say I blame Peter. His Master was under attack, the one he left everything to follow. His best friend was being betrayed and falsely accused right before him. If you’re going to carry a sword, you must be prepared to use it. And what better time than then? It was his duty to protect Jesus, an honor even.

So Peter decided to fight. And it was over as quickly as it started.

The sword unsheathed. The flash of metal in the torchlight. The servant clutching his ear, or what was left of it, in pain. Then the stern rebuke.

“Put your sword back into its place. For all who take the sword will perish by the sword. Do you think that I cannot appeal to my Father, and he will at once send me more than twelve legions of angels? But how then should the Scriptures be fulfilled, that it must be so?” (Matthew 26:52-54).

That night in the garden and the days that followed were a rollercoaster ride of failure and redemption for Peter. His transformation became evident in the stories that followed in the Acts of the Apostles.

But with the completed scriptures today, we can  see the radical difference in post-Pentecost Peter in his New Testament letters. Rather than spilling ink on all the incredible events he witnessed like walking on water, the Transfiguration, the empty tomb, he chose to write as a humble leader to humble exiles.

He clearly grew a lot. The lessons he learned fill the space between his words. And this is especially evident when he instructs the early believers on how to deal with hostile authorities. Like that night in the garden, powerful people in the first century sought to destroy Christ and his disciples. The Roman Empire led by Nero was beginning to grow tired of these Christians. The antagonism from the culture around them was pressing in.

No doubt, some of these early Christians were ready to reach for their swords. Like Pre-Pentecost Peter, they may have begun to justify their own self-defense.

With that in mind, Peter shares what he had learned from Jesus thirty years earlier: “Be subject for the Lord’s sake to every human institution, whether it be to the emperor as supreme, or to governors as sent by him to punish those who do evil and to praise those who do good. For this is the will of God, that by doing good you should put to silence the ignorance of foolish people” (1 Peter 2:13-15).

Peter’s instruction provides a window to his changed heart. He had retired his sword and taken up his cross. And his words call us to do the same.

Like Peter and these early believers, we face hostility from without. The governing authorities that rule over us may even oppose our faith. We are tempted to strike back, to lash out, to cut them. We justify the need for retaliation. “If Christians don’t stand up and fight back, who will?”

Rather than a sword, what we need is a cross. Subjection and submission may seem foolish, almost as silly as offering your other cheek when you’ve been slapped. But therein lies the power of God.

“For the word of the cross is folly to those who are perishing, but to us who are being saved it is the power of God” (1 Corinthians 1:18).

When we choose the cross over the sword, we have a power much greater than our fiercest strike. Rather than screaming louder than the world, we can actually “put to silence the ignorance of foolish people” (1 Peter 2:15). And through our Christlike submission, those who oppose us “may see your good deeds and glorify God on the day of visitation” (1 Peter 2:12).

But is this the kind of “winning” we truly desire?

The way of the cross is not the easy way or the natural way. But it’s the Jesus way. So put your sword back in its place and pick up your cross. Either way we perish, but one leads to true victory.