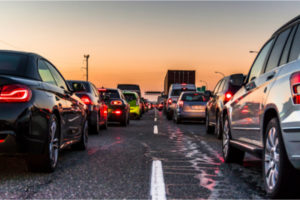 I was out running errands one Saturday. City traffic was a little wonky, but to be expected, especially since I was near the mall and other shopping centers. Oh yes, and don’t forget to factor in construction on every major street and highway in the city.

Anyhoo, I was driving in the right lane, ready to turn at the next light, when I realized that everyone was making their way into the left lane. As I continued on, I noticed that an officer had someone pulled over. Of course, I needed to make my way over, so I put on my signal, in hopes that someone would slow down enough to give me space.

Well, I sat for a few seconds while at least four cars passed me by; they’re not so gracious about letting people in around here. The driver of the last car that passed me, looked me in my face with an irritated expression, as if I’d decided to cut him off for no reason. He didn’t see what I saw ahead, he had no idea that cars were trying to move over because an officer had the lane blocked.

Others May Not Under the Call on Your Life… and That’s Okay.

This is not my venting session, although that driver stepped on a nerve of mine. Nope, this is to let you know that not everyone can see what you see. They have no idea why you are moving the way you are or why you have to change lanes. And you know what? That’s okay! In fact, it’ll probably always be that way.

Often, we get frustrated because we want those around us to understand our call and our assignment, and most times, they won’t. There are times when people just have to see the manifestation of the vision to get it. There will also be times when folks will see it and still not support you or even try to understand. Yes, that’s still okay.

This realization made me a little less irritated with the driver that wouldn’t let me over (not much, though). I understand that he had no idea that I needed to get into his lane. See, there will be times when others feel threatened by your call because to them, it seems you are trying to “drive” in their lane. When you are focused on others and what they have going on, it can look a lot more like taking over your lane than you just going in the same direction.

So, What’s the Play Call?

I saw a Facebook status one day that read, “It’s not everyone’s job to understand your calling. It wasn’t a conference call.” Listen, this is one of the truest things I’ve probably ever read. You must be okay with God leading you into places and spaces that others won’t understand or be willing to go with you. I know it can be tough when others aren’t willing to “let you over”, but just trust the direction that God is steering you. Here are a few things to remember when folks won’t let you in their lane:

No matter what looks of irritation or reactions you get from others, be sure to operate in the lane that God is calling you to in this season.