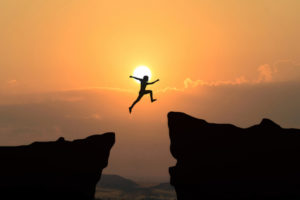 A while back, I was talking with a young lady who said she was going to quit being on a worship team because she was so frustrated with how the other members treated her. Too often people give up what they really want to do because of discouragement or fear. It’s something we all face. I remember the first time I was asked to speak in church. I wanted to do it, but I was so afraid! I knew God’s promise that He would be with me, but I got in agreement with that fear, wrapped it up in excuses for why I couldn’t do it, and said no. When I gave in to the fear, I became discouraged and miserable. Then I realized that fear was at the root of why I was so miserable, and I saw that this was the enemy trying to steal my destiny. I had to unwrap the fear and discouragement from my list of excuses and recognize them for what they really were.

In Joshua 1, Joshua and the nation of Israel stood at the border of the Promised Land, where forty years before they had failed to go in and conquer because of fear and discouragement. God’s promise was: “I will give you every place where you set your foot.” But all the obstacles to the promise remained in the land—powerful nations with armies, fortified cities, and giants. God said to Joshua, “Have I not commanded you? Be strong and courageous. Do not be afraid; do not be discouraged, for the Lord your God will be with you wherever you go” (Joshua 1:9). God broke it down in the simplest terms for Joshua. “You need to be strong and courageous because your biggest enemies are fear and discouragement, not armies and giants.” God commanded Joshua, “Don’t let fear become part of your identity. Don’t let discouragement define you.”

What do you fear? Criticism? Failure? What is a discouragement to you? Something someone said or did to you or an obstacle you can’t seem to overcome? God’s remedy to Joshua is the same remedy He gives to us. He said, “The only way to fight fear and discouragement, to be strong and courageous is to take hold of My Word and obey it. Keep My words always on your lips, and discouragement and fear must flee. Get My Word into your thinking and meditate on it until it drops down into the very depths of who you are.” He says He will be with you wherever you go. And if God will bring Joshua to possess the Promised Land, He will bring you to possess His promises, too!