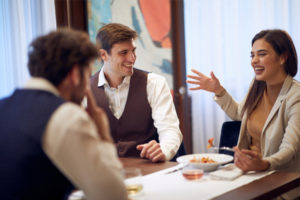 It’s Time to Use Our Words to Declare Good Things

I once read an article about doctors who incorporated “talk therapy” to treat patients suffering with depression. Instead of medicating the problem, the doctors instructed the patients to start making positive declarations over their lives, saying such things as: “I have a bright future. People like to be around me. Good things are in store.”

Some of the patients were depressed because they were facing life-threatening diseases and felt there was no hope. The doctor asked them, “Has anyone ever survived this disease?” The answers were always yes. So he told them, “Then I want you to start saying, ‘I will make it. I will be one of the people who beats the odds.’ ”

Those patients obeyed the doctor’s orders, and amazingly, many of them not only came out of their depression, but they also made full recoveries!

It’s time to use our words to declare good things! Speak blessings over your life and your family. Throughout the day, say things such as, “I have the favor of God. I am strong and healthy. I’m well able to do what I need to do.”

Did you know that what you say about yourself has greater impact on you than anything anybody else says about you? Many people are overly critical of themselves, saying, “I’m so clumsy. I can’t do anything right.” “I’m so overweight. I’ll never get back into shape.” “I never get any good breaks.”

They may not realize it, but they are cursing their future. Those words sink into their minds. Before long, they develop a defeated mentality, low self-esteem and diminished confidence. Worse yet, those negative mindsets can interfere with God’s plan for their lives.

One of the best ways to break free from such strongholds is simply by speaking words of victory. Every day, look in the mirror and declare, “God’s Word says I am strong. God is fighting my battles for me. I’m excited about my future.”

Maybe you are lonely because you don’t have a lot of friends. Instead of complaining, start declaring, “God is bringing great people into my life. I know He loves me, so I can risk loving others.”

Speak blessings over your life, and as you do, you’ll go out with more confidence, you’ll be more congenial and, in turn, you will attract new friends.

When discouragement comes, instead of sitting back and accepting it, say, “No, I’m a victor and not a victim. I may have been defeated before, but the past is the past. This is a new day.”

It’s not enough just to think it; you need to hear it, because what we constantly hear ourselves saying we will eventually believe.

Some people live in a perpetual state of financial crisis. They can’t seem to pay their bills — always living “under their circumstances” and constantly speaking defeat.

If you are struggling financially, remind yourself repeatedly, “I am the head and I am not the tail. I will lend and I will not borrow. Everything I touch will prosper and succeed.”

Yes, it is true! That is what faith is all about. The world says you need to see it to believe it, but God says you must believe and then you’ll see it. You must speak it by faith.

Make a list of your goals, your dreams, the areas where you want to see change. Confirm your desires by Scripture, and then every day before you leave the house, speak those blessings aloud. Something supernatural happens when you speak those words aloud.

Maybe you struggle with condemnation because of past mistakes. Each day, boldly declare, “I am the righteousness of God in Christ Jesus. God is pleased with me. He is on my side.” If you say something like that on a consistent basis, guilt and condemnation won’t hang around.

When my mother was diagnosed with terminal cancer in 1981, she made a list of 40 Scripture passages about healing. All through the day, she’d quote those Scriptures and say things such as, “I will live and not die. God is restoring health unto me. With long life He satisfies me.”

Even though she weighed a mere 89 pounds and the doctors had given her only a few weeks to live, Mother refused to see herself as defeated and dying. Instead, she saw herself growing stronger, living a long, healthy, happy life. Her words caused her faith to rise and filled her with hope.

Little by little she started feeling better, and eventually, God supernaturally healed her! Today, nearly a quarter of a century later, Mother is still vibrantly alive and praying for other people to be healed, as well. Moreover, to this day, before she leaves the house, she speaks words of blessing over her life.

You can do the same thing. Find the Scriptures that apply to your situation and then declare them. This is especially important in areas in which you continually struggle. Do not let another critical word come out of your mouth about yourself. Instead, take a few minutes every day to bless your life, to declare the victory.

Understand, it’s not enough to avoid saying anything negative; you must go on the offensive and start making positive declarations over your life. Remember, your own words will have more impact on your future than anything anybody else says about you.

Friend, if you’ll do your part and speak words of victory, God will pour out His favor in exciting, fresh ways in your life, and you will live the abundant life He has in store for you.