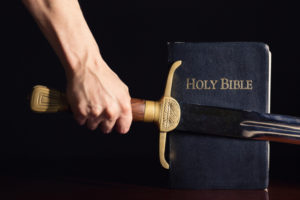 Paul speaks through Timothy to us, his charges echoing through the ages. As Christian ministers, we must be ready and willing to defend the faith. If ministers don’t do it, who will? That is one reason why God placed the “able to teach” qualification in 1 Timothy 3.

The concern is not eloquence but the ability to rightly study, interpret, teach, and apply God’s Word. The truth is the bone marrow of the church. When the truth is compromised, the church withers. Vibrant mission and ministry do not occur where there is doctrinal decay.

And as you go about the business of defending the truth, be encouraged, God will defend you. As you care for the truth, God will care for you. As A. W. Tozer once said, “God will never let a man starve to death for telling the truth—remember that, my friend.”[1]

Defending the Faith, A Timely Charge

While every generation is called to defend the faith, our generation especially is called to this responsibility. The twenty-first century is the age of apostasy. Theological liberalism has fully metastasized globally. In its wake are shipwrecked ministers, undermined faith, dead churches, and dying denominations.

In addition to theological liberalism, we are also confronted by social and cultural upheaval. All of this makes the twenty-first century a uniquely challenging and exhilarating time to minister.

With the sexual revolution now having come full bloom, and the American public having largely accepted same-sex marriage, pressure for the church to fold on issues of sexuality, gender, and marriage will only intensify. Orthodoxy has never been popular, and it will be decreasingly so.

There is an unavoidable collision of worldviews, and the irony is that the more our culture tries to silence us, the more the minister must speak, because the church must be strengthened and warned. Now is the time for the strongest men to preach the strongest sermons in the context of the strongest churches. You don’t need to be a trained apologist. Though God gifts His church with such persons, that may not necessarily be your calling. You must, however, in your own context and with your own abilities, be ready and willing to study and speak the truths of Scripture.

At its most basic level, to prepare to defend the faith—in the words of Peter—is to “sanctify Christ as Lord in your hearts, always being ready to make a defense to everyone who asks you to give an account for the hope that is in you” (1 Peter 3:15).

You can’t defend the faith without having studied it. First, you must study the faith so you don’t inadvertently fall into error yourself. Heresy is unwittingly preached in evangelical churches every Sunday by ill-equipped pastors. That’s a tragedy, and you don’t want to be among their number. You don’t have to be an honors student, just a diligent one. After all, as a general rule, God has chosen not to populate the ranks of his ministers with the wise or the noble, but with those who are willing to be counted a fool for His sake.

More broadly, you must study the truth so you can uphold and pass on biblical, orthodox Christianity. As you study, you’ll find how well the Bible defends itself. As Spurgeon once quipped, “Defend the Bible? I would as soon defend a lion! Unchain it and it will defend itself.”[2]